On Sunday, March 10th, I started to feel those same familiar pains in my left side…I was not happy…I did not want to have to deal with this right now on top of everything else.  I kept praying for a miracle. I became so sad and discouraged because the pain was not improving as the day wore on…in fact, it was progressively getting worse.  I knew that I would be headed to the doctor in the morning…where was my miracle?

I did receive a miracle…just not the one I had been praying for (to be healed)…I was sitting on my bed using my ipad…I decided to check facebook…which I never really do on my ipad…I noticed Paul’s name on the side bar.  I decided to click on it, even though I knew he wasn’t really on there.  This is what popped up: 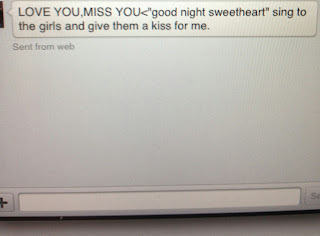 To read those words,” MISS YOU, LOVE YOU-“good night sweetheart” sing to the girls and give them a kiss for me.”  Wow!  I couldn’t believe it…I started to cry…Sophie was sitting by me on my bed…I got up to go downstairs so I could REALLY cry.  She asked me where I was going and if I was crying.  I said yep, I am crying a little because I miss daddy.  I also told her I needed to go down stairs for a few minutes.

As soon as I got down stairs, I really started to cry.  I called a couple of friends to come over and see the message…so, people would believe me…actually, I guess it was so I would believe it.  They were as amazed as me. They suggested taking a picture (that hadn’t even occurred to me).  So we did…now everyone can see the message.

I looked at the date on the message and from where it was sent.  I noticed April 19, 2010, 8:39 p.m.  I also noticed it said it was sent from the web, not from heaven!  Anyway, I couldn’t remember Paul ever sending me that message.  I wracked my brain and couldn’t think of where he would have been that he would send that message to me.  After a little digging and research, I discovered that it was the only private message he sent me on Facebook and it was when I took the girls to St. George for spring break (he wasn’t able to go with us).

This message was written to me three years ago and I don’t remember ever reading it (I probably did, I just don’t remember). I know that it was a message from Paul, for me to not only read then but to read now, to help me with my sadness. Just as the scriptures were written many years ago…we are told to read them daily because we forget what we read and we need that reassurance and knowledge that God does love us and wants to help us. Paul sent me this miracle as a reminder that he loves us and is watching over us.  I have re-read the message daily to help me cope with his loss.  I need that constant reminder that he loves me and misses me as much as I love and miss him…it is weird but you start to doubt that they still love you and miss you…I guess I feel like he will forget about me and move on…

On Monday, I went to the doctor.  Of course, my diverticulitis is back.  I go daily to my doctors office and get a shot of antibiotic for seven days.  Today, I got my fifth shot, so I am almost done.  Yeah!

Because I have had several flare-ups my doctor has suggested I have surgery to remove part of my colon.  I meet with a surgeon on Tuesday to discuss my options.  I honestly don’t want to do surgery if I can help it.  Diverticulitis is definitely a problem that is worsened by stress…let’s see have I had stress in my life lately?

Anyway, I may try a few other things, before I do the surgery, to see if I can prevent it from happening again.  I will know more once I meet with the surgeon.  It is the same surgeon who removed Paul’s stomach…that might seem a little weird at first... he is an excellent surgeon.

On the day I went to the doctor, Hailey called me from school at about 2:15.  The first thing she asked was when I would be having surgery. I explained to her that I may not have surgery and I still needed to meet with the surgeon.  Then she said that her stomach had been hurting and she really wanted to come home.  I asked her if she felt like she could stay until school got out at 3:30.  She said no.

When I picked Hailey up, I asked her is she was sick because she was feeling stressed.  She said yes and started to cry.  She told me that she was worried they were going to cut me open and find cancer.  She said that she was so afraid that she was going to lose me too.  I reassured her that my problem is not cancer and that I won’t die anytime soon (for my children’s sake, I hope not).  It breaks my heart that my children have to worry so much about these things now…

This morning, Sophie woke up with a big smile on her face.  She said, “Guess what mom?”  I said, “What?”  She said, “I had a dream with daddy in it.  He told me that he loved me very much!”  I asked her where he was while he talked to her.  She told me that he was hanging Christmas lights on the house.  She said, “Oh, mommy it felt like he was really here with me.”  She also said, “Isn’t it great that daddy was with us in this room last night helping me to have good dreams?”  Of course, I was so happy for her.  I told her that it is great blessing to have her daddy watching over us.

As soon as Hailey woke up and came in to my bedroom (Sophie has been sleeping with me), Sophie told Hailey all about her dream. I am truly grateful that Sophie had that experience.  She really needed that…I hope there are more experiences like that for her and the rest of us.  Okay, I must admit, I was a little jealous that I didn’t get the same dream…I actually had a horrible dream last night.

Getting through all the paperwork, health insurance issues, and other miscellaneous things have been quite exhausting.   I have spent hours on the phone.  Just thinking about it makes me tired.  Health insurance is definitely the worst issue…at first they told me I was going to pay $1600 a month…then they sent me something in the mail that said it would be $99 a month…then they finally called me and told me I would be paying $480 a month for six months and then the price will go up to the higher amount…they are subsidizing for the six months.  They still can’t tell me what the higher amount actually will be…somewhere around $1100-$1600 a month.

I have been calling on private insurance, which we will eventually need anyway.  Well, that has been a joke.  They won’t accept me because of my diverticulitis.  They said the only way I would be accepted is if I have the surgery…then the insurance companies will look at me in 1-2 years afterward.

I asked about individual plans for just my children.  Because of Obamacare, the insurance companies will not do individual plans for children.  Evidently, in 2010 a law was passed that all children under the age of 19 have to be accepted for health insurance regardless of their health status.  This was not well received in the insurance industry, so they felt they needed to change their policies…I won’t go into all the details here…

Anyway, I have actually discovered a benefit for me with regards to Obamacare.  As of January 2014, Insurance companies can no longer deny people insurance due to health issues.  Everyone will be entitled to it.  I have always felt strongly that everyone should be entitled to health care…now, I just have been placed in a position where I feel even stronger about it.  Because I don’t want to get into political issues here, I will just say that I am relieved to know that we can get health insurance next year… Cobra can get very expensive!

Today I am grateful for the beautiful sunshine that we have seen for the last couple days. I am also grateful for my amazing family and friends who continue to support me with love, help, and kindness.

I miss Paul every day.  I have felt his presence with me at times….I just wish it could be all the time!  Maybe I will get a dream like Sophie tonight!
Posted by Sandra Winchester at 1:39 PM

Email ThisBlogThis!Share to TwitterShare to FacebookShare to Pinterest
Labels: The Cancer Journey