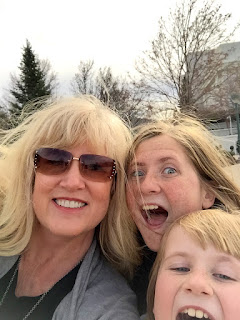 In February 2000, I married my Prince Charming, a widower who had lost his first wife to suicide, giving me the opportunity to be a step-parent to his three teenagers from his first marriage.  We were also blessed to have two beautiful daughters together.
On November 28, 2011, we received a phone call that forever changed their lives. My husband was told the horrific news that he had stomach cancer. Within two weeks of receiving that phone call, he had numerous scans, met with doctors, and had surgery to completely remove his stomach. The surgery was only the beginning of our 14-month battle.

In February 2013, after only 13 years of marriage, my husband passed away leaving me a widow to raise two young daughters. I began blogging about our journey through cancer at the time of my husband’s diagnosis. I continue to blog about my journey through widowhood and the many adventures and challenges of single parenting.

After my husband died, I wondered if I would ever feel happiness again. I felt as if my “happily ever after” was more of a “happily never after”.  I am learning to find happiness in my new “unplanned” life, but admit that it is not an easy road to be traveling. I have discovered that it is difficult to juggle all of the many responsibilities as a single parent.  I have also discovered that being in the dating world again brings a whole different set of challenges.

We ALL experience trials. No matter what your trial is, you have two choices. How do you go on? Either you let the adversity consume you with sadness, doubt and fear, which ultimately can overtake your life, or you fight with all you have!  I have chosen to fight and recognize that it is through God I receive the strength and guidance necessary to fight the daily battles of life.

In a talk given by Dieter F. Uchtdorf, “The Infinite Power of Hope”, he said this about his mother…
“…I know with certainty: her faith overcame her fear, and her hope overcame her despair. She was not a woman who would sit and bemoan tragedy. She moved. She put her faith and hope into action.”
I want my children to be able to say this about me as their mother.  I want them to know that we can make the best of any situation!