It was October 2009.  Life was good—no it was amazing!  And then...everything in our life started to change. I remember when it happened. It was the day after we had these family pictures taken...

I ended up at the hospital with severe pain and a diagnosis of diverticulitis.  After a few days in the hospital and 10 days of IV antibiotics I was finally on the mend.  At the time I was really surprised that I had this situation arise.  I had been eating really healthy and exercising—I was in the best shape I had been in since before I had my children.

Isn’t it funny how, often as we look back on life’s experiences, we see those painful trials really prepare us for the next situation that is headed our way.  I was stronger because of what I experienced and had a new understanding of pain and overcoming.

Just a couple months after I had my hospital stay, my husband reinjured his back while helping someone move.  He’d already had two previous surgeries from a broken back and this just proved to be more than his back could handle.

With surgery finally scheduled in May 2010, we were hopeful that we might start to get our life back as we knew it.  But no such luck.  He was that “less-than-1% chance” something would go wrong.  While moving his iliac artery over, a vein ripped and he bled out on the table.  Yes, he coded.  No pulse.  No blood pressure.   Miraculously, by the grace of God, and with the help of two vascular surgeons and 15 units of blood, he lived and had no brain or any other apparent damage.  Just one problem…a big problem…his back still was not fixed.

So, two months later we went back for another surgery. Obviously, since the attempt to perform the surgery the first time going through the front of his abdomen didn’t work, they opted to perform a spinal fusion through his back.  This was successful.

After a very painful and stressful six months, my husband was finally able to return to work.  Little did I know at the time--those surgeries were just more stepping-stones in preparation for the next obstacle about to hit us.

On November 28, 2011, we received a phone call that forever changed our lives.  My husband, was told the horrific news that he had stomach cancer. It was a moment of sheer terror and disbelief.  Within two weeks of receiving that phone call, he had surgery to completely remove his stomach.

The surgery was only the beginning of our 14-month battle.  There were issues with eating without a stomach, strictures forming in the esophagus, chemotherapy, scans, pain, vomiting, and severe weight loss.  The list goes on and on.

In July 2012, my dad had a massive heart attack.  About three weeks after surviving a quintuple bypass surgery, he was finally allowed to go home.  Four days after his return home my mom was rushed to the hospital with breathing issues.  It was discovered that she had pneumonia. Two days later she died.   My mom had been suffering beforehand from a weakened lung condition--the doctors figured she caught the pneumonia while visiting my dad in the hospital.

On February 25, 2013, just six months after my mom died, my husband lost his battle with stomach cancer—leaving me a widow to raise our two young daughters.  In September 2015, after feeling like I was getting my feet back on the ground, my father died.

I have been pondering my life’s story.  I am discovering life is about overcoming the pain…the fear…the sorrow…the disappointments…the loss.  But how does one overcome these things?

As a grieving person you have probably been provided with to-do lists to help with the grieving process through books, social media, family members, etc...  But, how often do you actually DO what is written and/or prescribed?  Grieving requires more than a mere written to-do list.  It requires ACTION.  It is in the action that we heal.

Someone who is grieving tends to feel overwhelmed easily and often times forget the simplest of words or tasks.  So, for someone to give you a long to-do list it can become daunting.  There is one word that best describes what has helped me the most in my grieving process.  God.

For today I am offering you this challenge.  Throw away your current to-do list and write a two-do list.  One, turn to God in prayer.  Two, read His word through scripture study.  Voila, now you have your two-do list!

I have tried grieving both ways—with God’s help and without.  And it is much easier to do this with His help!  With God's help you can overcome your trials. 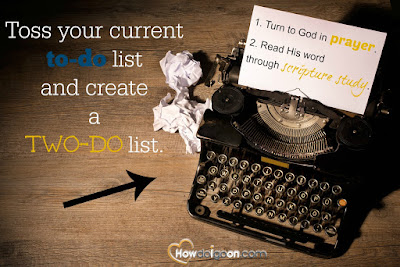 You are an OVERCOMER!

Posted by Sandra Winchester at 1:55 PM