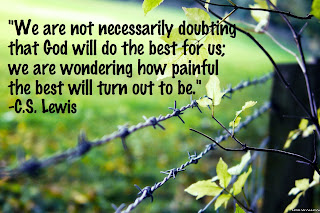 I have discovered one of the biggest challenges in this life is to REALLY trust God. It is easy to say that I do, but can be very hard to actually put into practice.  When trials, like the death of my spouse, come into my life I have been tested to see where I really stand.

Time and time again, I have seen the hand of God in my life.  He is guiding my life.  So why don’t I always trust Him?  Why do I “fight” his guidance? I have been pondering these questions a lot recently.


I have come to realize, trust is more than believing that God is directing your life and has a plan for you.  It is trusting that, with God’s help, you can endure the direction your life is headed.  It is trusting that I will receive the best outcome for my personal plan and growth. Therefore, trusting God is really a three step process.  First, I must trust that God knows my plan and is directing my life.  Second, I must trust that He will guide me through the path placed before me.  Third, I must trust the end result will be what is best for me.

I have discovered that, more often than not, I trust God is directing my path.  However, I have lacked, at times, the trust that He will help me on my path.  I forget that He can and will help me to get through the loneliness, sadness, pain, etc… I have also struggled with the third part of trust. It is hard to trust God because it is hard to visualize that something so painful can turn out to be the best thing for me.

Let’s face it, we all want to feel loved; most of us don’t want to be alone; we don’t want to feel sadness; we don’t want to hurt.  Many of the things we face in this life cause us to feel these undesired—downright painful—emotions.  Even though we may know the outcome will be in our best interest, we still try to avoid things that will cause us pain to get to that point.  That is human nature. God understands why we struggle with trusting Him completely.

One of my favorite books is called “The Lord Looketh on the Heart”, by Max & Bette Molgard.  I would like to share a story from that book.  It is an old Arab Legend that can help us to understand God’s panoramic view.

Posted by Sandra Winchester at 2:02 PM